One day while watching our Leafcutter, I realised that her behaviour had subtly changed.  Usually her foraging trips were short – she would leave to collect pollen and nectar and then return only a couple of minutes later.  Now her trips were 15-20 minutes long, and when she returned she’d started to land and rest near to the beehouse for a couple of minutes before resuming her nest building activities.

Her appearance had also turned a touch ghostly. 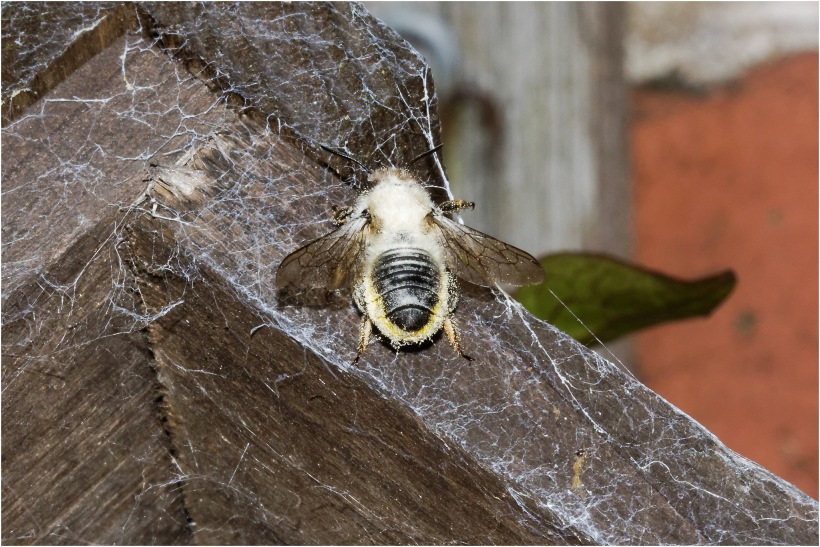 Despite her now distinctly mouldy looking appearance I didn’t panic – I had seen this before in honeybees.  Our Leafcutter had found a patch of Himalayan Balsam somewhere.

Himalayan Balsam is a striking, pink flowering plant which grows to about 2m in height. It was introduced to Britain in the 19th century as an ornamental plant.  Unfortunately it is now one of the UK’s main invasive plant species.  It very quickly colonises and overcrowds native species, killing them off.  Despite it’s pretty appearance, it’s a bit of a thug – our apiary backs onto a riverbank where Himalayan Balsam grows, and each year we find strands of it growing straight through the concrete apiary floor. 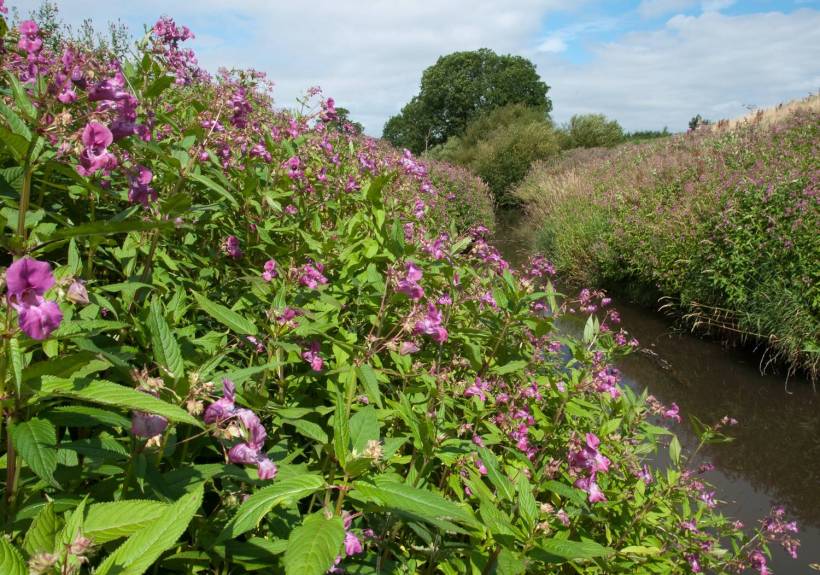 It’s very common on waterways – it is found on all of Lancashire’s main rivers.  I don’t have a major river near the house, but there is a brook about ten minutes walk away – this would also explain the increased length of our Leafcutter’s foraging trips.

At first thought, it seems odd.  Why would a bee expand so much energy flying to a plant some distance away, when there were perfectly good alternatives nearby?  One of the reasons that Himalayan Balsam is so successful in dominating other species is that the nectar it produces is so beloved by bees.  Given the option they will choose Himalayan Balsam over most native species of plant.  And when entering the flowers to get to the nectar, they are covered in the plant’s white pollen – which they then take to another Balsam flower.  Therefore Himalayan Balsam has evolved to ensure that it is very well pollinated – at the expense of the nearby native plants which suffer decreased pollination and therefore slower growth as a result.

While not a notifiable invasive species like Japanese Knotweed, it’s now widely recognised as a problem and parks, nature reserves and estates try to keep it under control by holding ‘balsam bashing’ days.

While I’m not the greatest fan of Himalayan Balsam for the reasons outlined above, our Leafcutter certainly seemed to be thriving on it.  She very quickly finished another nest tunnel. 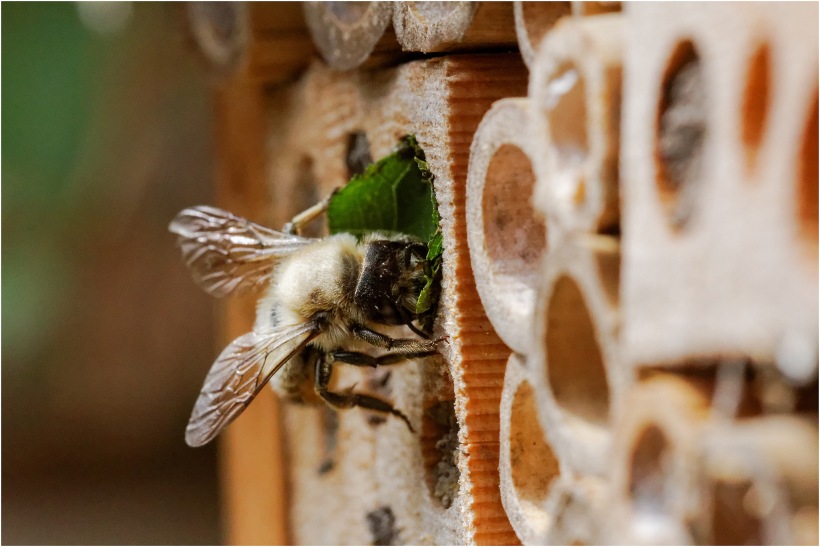 I’d seen ‘our’ Leafcutter roosting in the beehouses for a few weeks now, but tonight was very happy to see that she’s started nesting there!  As I went out into the garden after work one night I saw her going to and from the beehouse, returning each time clasping a section of leaf before taking it into the tunnel.

I grow a rose bush in the garden especially for Leafcutter bee nesting material – I’d read that rose leaves are their preferred choice when constructing nests.  I’d been watching this carefully to spot any signs that it was being used with no joy, and each trip the bee made to fetch leaves was very short – with only a minute or so between her leaving the beehouse and returning.  So where was she going?

It didn’t take me long to find the answer.  About 6 feet away from the beehouses is a Snowberry bush, and this showed the tell-tale signs that a Leafcutter bee had been at work.

That night I also managed to get a shot of our Leafcutter bee-hind, which meant that from this and her size I could finally identify her as a Wood-Carving Leafcutter Bee (Megachile ligniseca)

I staked out the beehouse over the weekend and managed to get a shot of her bringing a leaf back to the nest. 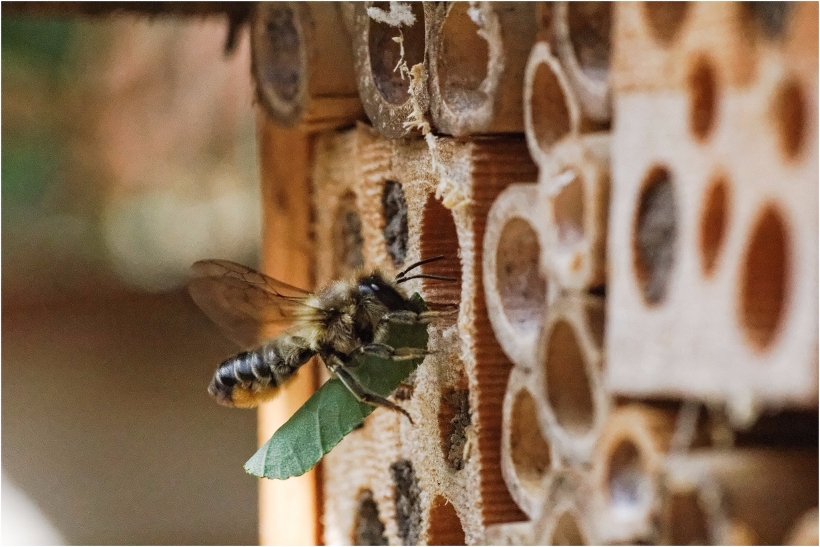 I thought she must be getting close to finishing this nest as she seemed to be ‘auditioning’ new tunnels in between completing the current one, flying around the front of the house to view all the options and popping in and out of tunnels for a closer look.

Then by the end of the weekend, she’d finished!  Leafcutters always seem to like to finish a nest off by sticking a full leaf to the front for a final flourish.